After our 2021 Randall Family Big Idea Competition Virtual Awards Ceremony, we at the Big Idea Center caught up with the grand prize winning team, ReSolution, to discuss how four engineering students became entrepreneurs and what their next steps are to bring to life their idea to eliminate common causes of irritation and infection for contact users through the use of their automatic, self-cleaning, portable contact case.

What was the inspiration behind your team’s idea?

We came up with the idea last year in our ChE 314 Product Design Class. As we were looking for problems that needed solving, we realized that two of our four members were experiencing discomfort due to their contacts. As we talked more, we realized this was due to failures in proper care that both members admitted were pretty routine. We considered several contact lens ideas until we decided on the simple, intuitive ReSolution case design that we have now. I think part of the reason we decided to move forward with this project was the fact that even if it failed as a product on the market, it was still going to be something that we wanted to be able to have and use ourselves. As it turns out, non-compliance in contact lens care resonates with almost every wearer we talked to; that’s when we knew that there was an opportunity for our product. 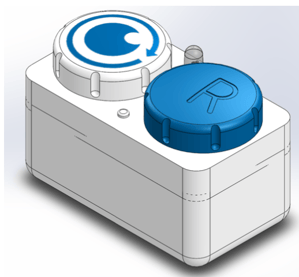 What value did you get out of participating in the Randall Family Big Idea Competition (RFBIC)? What are your key learnings from the experience?

The Randall Family Big Idea Competition was a great opportunity for us to refine an idea that originated in the classroom and develop it into a product that could actually be taken to market. The competition not only gave us an incentive to pursue this idea further, but it provided us with the criticism and mentorship we needed to take our project to the next level. We would like to thank everyone who mentored us and gave us feedback on our product over the course of this competition, especially Babs Carryer, Rhonda Schuldt, Don Morrison, Morgan Fedorchak, Ed Bechtold, and of course, our mentor Gary Glew.

What thoughts/feelings did you have during the awards ceremony?

We are very thankful that we are all in a pod together, so we were able to meet in person to watch the Awards Ceremony despite COVID. Although it was virtual, the ceremony was very engaging and filled with inspiring and heartfelt speeches from the organizers of the competition and past winners. But honestly, once the winners started being announced, it was nerve-racking. We thought we had done a good job, but by the time they announced second place, we knew that, besides the incredible learning experience we had already received, there were only two possible outcomes: we won the big prize or we didn’t place at all. When ReSolution was revealed on that big virtual check, we were ecstatic! There was a lot of jumping up and down and screaming that ensued. After an influx of phone calls to friends and family, we gathered around to call our mentor, Gary, to thank him again for all his help and to start planning out our next step. 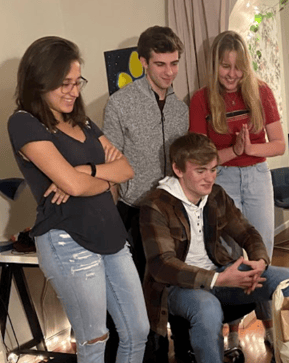 The team, post-win, waiting for their mentor, Gary Glew, to pick up the phone. Photo courtesy of Evan Kerin

What are the next steps for your team and how will the winnings be applied?

The first thing we need to do is get our papers in order and form an LLC. Our next step will be prototype development. Once we have a prototype we’re happy with, we’ll distribute it to a small number of users to receive feedback and refine our product. This iteration phase is where our winnings will come in handy.

What advice do you have for students thinking about getting involved with the RFBIC or innovation/entrepreneurship in general?

If you’re thinking about getting involved in innovation/entrepreneurship programs such as the RFBIC, do it. You literally have nothing to lose. No matter what the outcome is, this is an experience that shouldn’t be taken for granted. It’s an incredible opportunity that can’t be replicated anywhere else.

Congratulations to the ReSolution team on winning the $25,000 grand prize at the 2021 Randall Family Big Idea Competition! We look forward to what's in store for them and their big idea. View the rest of this year's RFBIC winning teams.