When Samira Kiani’s father was diagnosed with pancreatic cancer she scoured available clinical trials for cutting edge gene and cell therapies, but came away frustrated at the limitations posed by many of them as a result of their vulnerability to the body’s natural immune response to the therapies.

That frustration has sharpened her focus as a biomedical researcher, beginning as a postdoctoral fellow at the Massachusetts Institute of Technology, where she began exploring ways to make the CRISPR-Cas9 gene editing technology more safe and effective.

Kiani moved on to Arizona State University to start her own lab where she honed in on the concept of using a modified version of CRISPR to dial up and down expression of genes that regulate immune response to therapy. 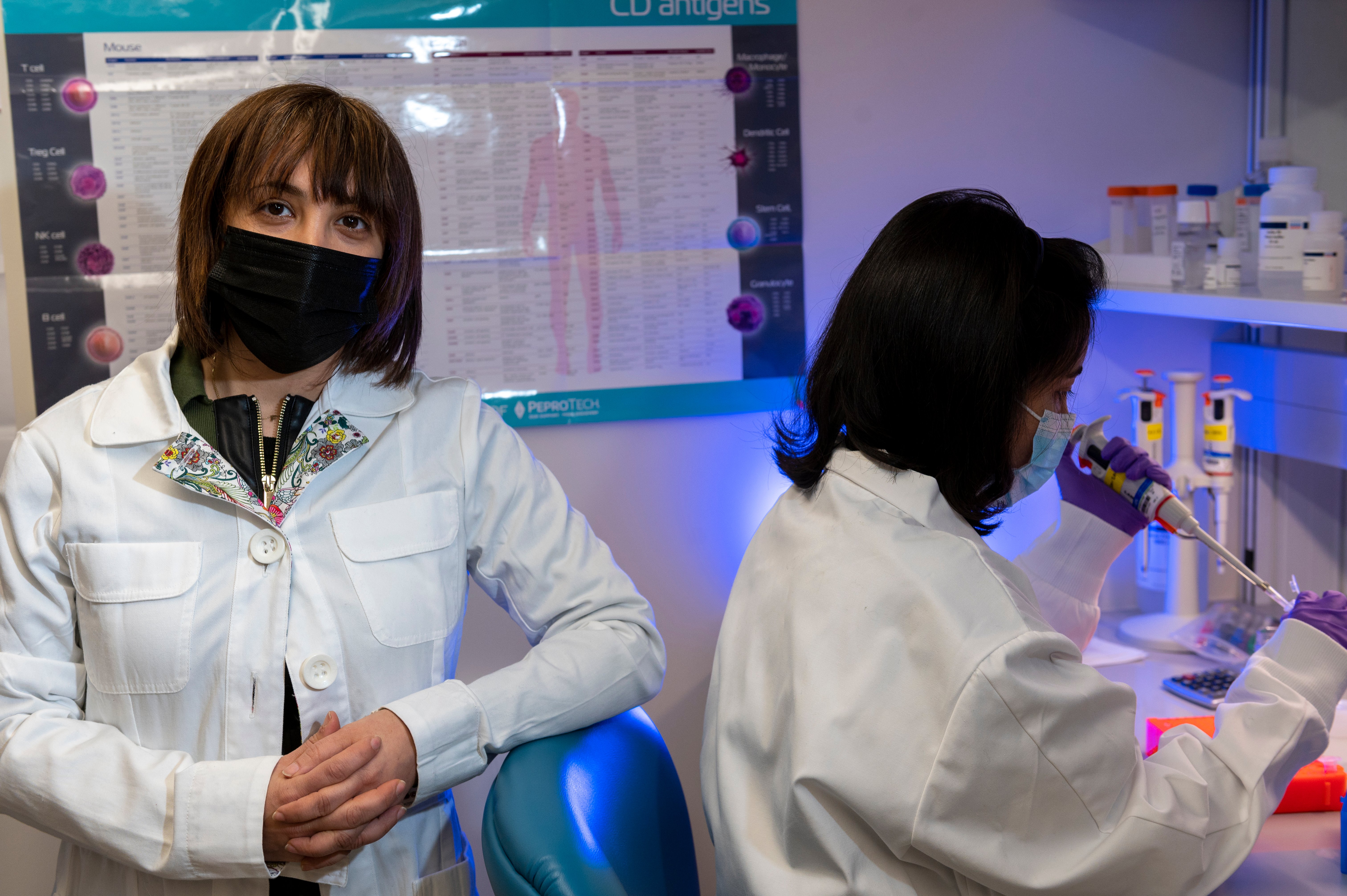 Samira Kiani in her lab at the University of Pittsburgh School of Medicine.

Something was missing in her lab, however, that she felt was hindering the potential of her research – access to clinicians and patients. That’s when she and her primary collaborator, Mo Ebrahimkhani, accepted an offer to create a lab at the University of Pittsburgh in the Department of Pathology within the School of Medicine, which enjoys a clinical collaboration with the UPMC health system.

She was also attracted by what she saw as Pitt’s emerging culture of innovation and entrepreneurship, as she had developed an interest in commercializing her lab’s discoveries so that they can have an impact on the treatment of disease.

Six months ago she formed GenExGen, a company that intends to bring to market a new generation of immune suppressive therapies using CRISPR, with herself as the CEO. The company remains virtual for now as Kiani works to build its foundation. She put together a pitch deck to begin approaching potential investors.

“It has been a steep learning curve. They (investors) give you all these questions that you don’t think about from a research perspective. I immediately got a lot of feedback that investors did not want to fund an ‘add-on’ technology that supplemented or enabled other therapies. They wanted a stand-alone therapeutic,” she said.

Based on pre-clinical data in mice, Kiani said her lab discovered one immediate indication to suppress immune response to treat a dangerous condition called “ the cytokine storm” in which the body's immune response to a pathogen or medical treatment goes into overdrive producing a severe inflammatory response, potentially causing organ damage, or even death. They are also examining the impact of this approach in modulating immune response to the gene therapies of cystic fibrosis.

“Later in 2022, once we have more data, we will look to raise an investment round, or partner with other companies to fund studies that lead to an investigative new drug filing with the FDA to begin the clinical trial process,” she said, while also exploring additional federal research and commercialization funding, such as the Small Business Innovation Research (SBIR) or Small Business Technology Transfer (STTR) programs.

Eventually Kiani said she would be interested in hiring an “industry savvy” CEO to navigate the journey to market, allowing her to potentially transition into a chief science officer role, while she continues her research into building new tools for cell and gene therapies.

“Having translational experience is making me a better researcher,” she said. “It informs how you run your research program in your lab and helps you be able to write better grant applications.”

If you're a Pitt innovator interested in finding out if your discoveries have commercial potential, consider the Innovation Institute's First Gear program, where you will work one-one-one with an experienced mentor to explore the value your innovation brings for potential customers. The next cohort begins February 22, 2022. Learn more.