The last time we checked in on Pitt startup Lumis Corp. it was still a one-man show and seeking its first customers. As we catch up with the company today it has a new CEO that is not necessarily new the company, several paying customers, and is seeking an investment round to accelerate its growth. The first time Nehal Bhojak met Doug Nelson, in 2016, he was defending his bioengineering doctoral thesis at Pitt’s Swanson School of Engineering, while also exploring the idea of starting a company around his PhD project under the guidance of Professor Joe Samosky and John O’Donnell from Pitt School of Nursing.

The project aimed to disrupt the healthcare training experience by making it more immersive, accessible, and efficient via a hands-free augmented reality and data-driven system that Nelson had taken the lead on developing.

Bhojak at the time was Director of Innovation at Idea Foundry, a Pittsburgh-based investment group. She was working with Nelson through her Life Sciences Accelerator Program and evaluating a follow-on investment to help spin-out the company from the University. During this time, she was asked to serve on a panel of judges evaluating applicants for the University’s Chancellor’s Commercialization Funds program. Nelson was one of the applicants.

He ended up receiving investments from both the Pitt program and Idea Foundry, and Bhojak became an early investor and advisor to the company.

Last November she returned in full force as the company’s CEO to accelerate the company’s growth given her deep experience with business development and healthcare innovation. With a capable CEO in place driving the business forward, Nelson has now stepped into the chief technical officer role and will focus on expanding the platform’s scope.

While the company has happy customers in several states, Bhojak and Nelson are looking to bolster market presence by expanding the company's product offerings and obtaining additional investment to scale up its commercial capabilities.

“Risk capital for companies that have a hardware aspect to their solution is still difficult to obtain in Pittsburgh, especially in the healthcare industry, but existing investors such as Innovation Works have continued to provide support and we have been having good discussions. We are also casting a wider net for potential investors,” Bhojak said. 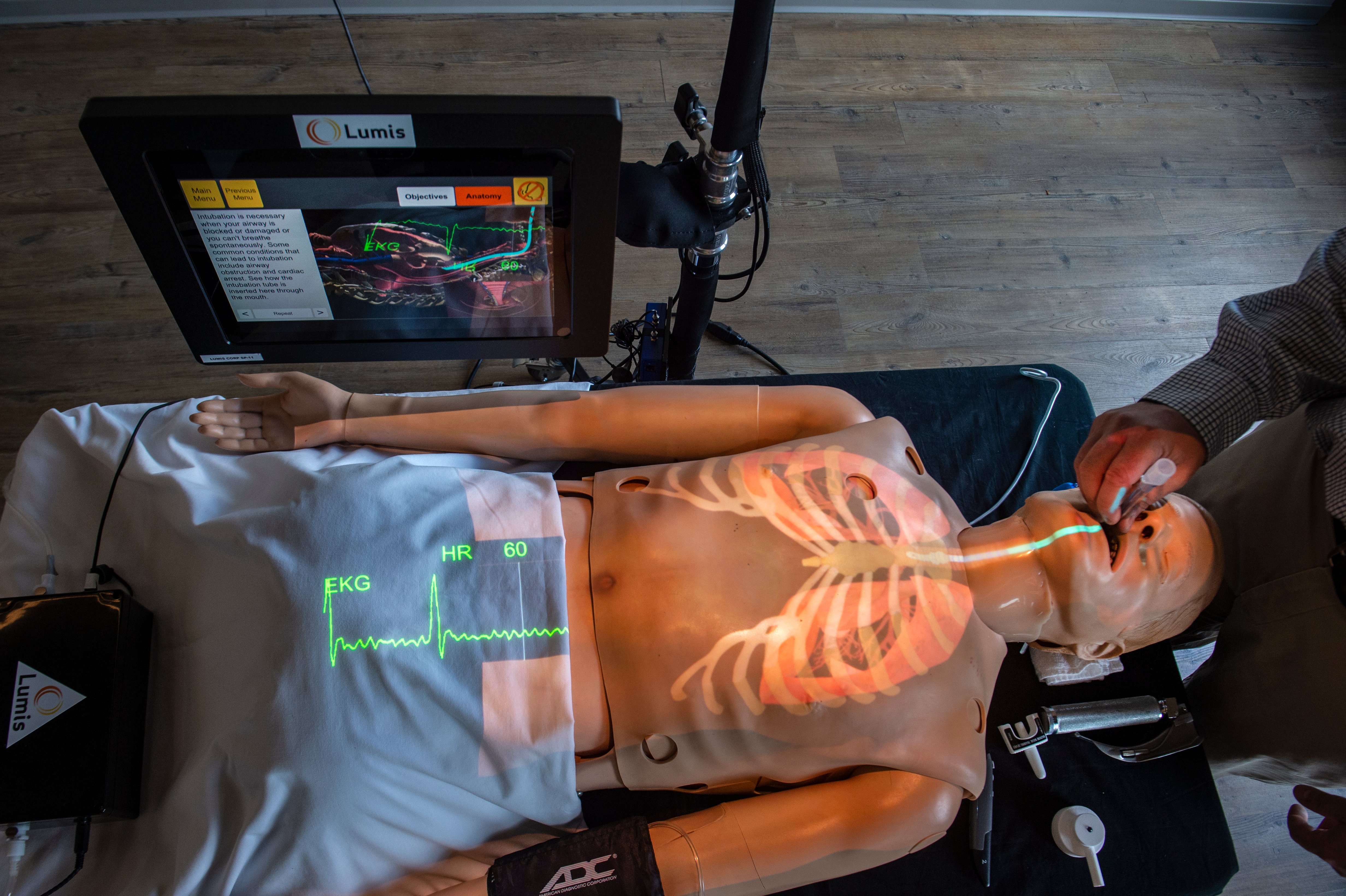 The augmented reality-driven platform uses a hands-free approach that merges the physical environment, such as a manikin, with a digital simulation to provide a realistic and immersive learning environment. The platform’s ability to combine advanced visualizations with tactile manipulation results in real time responses to student inputs, such as administration of drugs, and helps them better grasp the internal consequences of external interventions. This is key to developing critical thinking skills as they train to enter clinical settings.

The company initially focused on penetrating the nursing market, but Bhojak and Nelson are now pursuing opportunities across the spectrum of medical training, from emergency and critical care medicine to public health.

On the public health front, the company received Phase 1 and 2 SBIR grant from the National Institutes of Health to address the growing need for accessible training technologies for laypersons, first responders, and healthcare professionals to recognize and respond to opioid overdoses. This has since led to an investment from R.K. Mellon’s Social Impact Investment Fund.

“We are talking to key opinion leaders in several new market segments and looking to develop enterprise-level sales across health systems,” she said. Bhojak said that hospital systems such as UPMC that expand into rural areas can benefit by using their system to democratize training by providing the same quality instruction at community hospitals as in their urban facilities.

In total, the company has raised nearly $3 million to date in both dilutive and non-dilutive funding, and are looking for additional investment this year to help scale up business development, market and product expansion, and build strategic partnerships to accelerate growth.

If you are a Pitt faculty or student researcher with a discovery that might have a potential to impact the world, consider participating in the Innovation Institute's First Gear program where you will work one-on-one with an experienced business mentor as you explore the commercial viability of your idea or discovery through a process of market research and customer interviews. The next cohort begins September 6, 2022.